Since the first 40 Days for Life began back in 2004 in College Station, Texas, the prayer, fasting, and peaceful witness by about ¾ of a million people have yielded incredible results.  Where our vigils have been held we’ve seen…

156 abortion workers quitting their jobs (that we know of)

Now here’s a strange question for you.  If you had to pick a favorite among the three above, the one that stirred your heart the most, which would you choose?

For me, it’s the middle one.

There’s not just one reason for that, but the first is purely personal.  Nothing else moves my heart like a good conversion story.  Abby Johnson’s UNPLANNED, is a great example.  If you haven’t read it, you’re really missing one incredible story of God’s grace at work.

But beyond that, I think it’s the most surprising number of the three.  In fact, I’d be willing to bet that it wasn’t even on the radar for David Bereit and Shawn Carney when they launched 40 DFL nationally back in 2007.  Saving lives from abortion?  This was something that was fully expected.  Abortion centers closing?  I’m sure it was a reasonable hope.  But abortion workers quitting?  Who saw that fruit coming?

And finally, there’s this.  When an abortion worker quits – like Abby, or Ramona Trevino, or Sue Thayer – and then runs, like the Prodigal Son, back into the merciful arms of the Father, I don’t think it’s too presumptuous for me to say that, together, we’ve played a role in the saving of a soul.

So with that thought on your heart, please take a few moments right now to pray for that one soul who works for Planned Parenthood Pittsburgh who is most in need of our prayers.  Pray that this brother or sister of ours is graced with the courage to leave the world of abortion behind and run to the Father’s open arms.  Perhaps we could begin by praying the following on behalf of that person:

Trust in the Lord with all your heart;

And do not rely on your own insight.

In all your ways acknowledge Him;

And He will make straight your paths.

Be not wise in your own eyes;

Fear the Lord and turn away from evil. 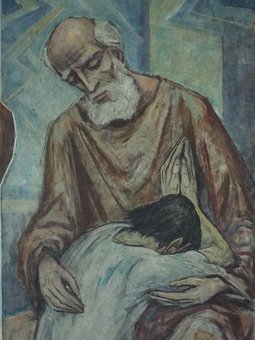 AND NOW, ON TO OUR REPORTS FROM THE SIDEWALK…

Wow did we have a great turn out for the sunrise shift.  From the beginning we had prayer warriors on both sides of the entrance from several of the North Hills Churches and then, like in the old Western movies, “the cavalry arrived.”  Fr. Tim and the faithful Guardians for Life pulled up in two vans and the faithful poured out. Prayer echoed on Liberty Ave.  Plus, we were blessed today to have two priests at the vigil.

Three young men walking by stopped to stare at the fetal models and were very interested.  We offered, and they accepted, a variety of literature to give out to their friends and agreed to consider participating in 40 DFL.  What a blessed morning.

Sue and Sue share SM duties for Saturdays 9am-11am.  We arrived at the sidewalk with Fr. Tim and his Guardians covering it with prayer!  Dear Barbara and Holy Wisdom parish were also there.   Holy Wisdom and St. John the 23rd adopted the full day as theirs to pray and offer sacrifice!  Many people from Sts. John and Paul came also, as well as men from a church in Weirton!  The sidewalk was full!

There were many women who entered the doors of PP today.  Some took our cards offering Free Pro-Life help, despite the escorts being out in full force.  Maria from Sion Iglesia commented how the Holy Spirit can cut to the heart and many, many prayers and rosaries were said today!  SA Judy and Sue stood at the far ends to reach as many people as possible!  God Bless everyone who came today and Sue on her Birthday!! TOS (The Other Sue)

Billy subbed as shift manager from 1-3 and wrote:

I was with Barbara who has been there since 7 am, she is such a trooper and is still there. I was with St. John and Holy wisdom churches and we were in such a movement of prayer, I felt God was there for the entire prayer. Nadine who had been with me last week was also there, and Sally, and I believe her husband too.  There was one pro choice protester there, but we tried not to engage and debate. We did have a lot of people pass by and say they supported us. It was such a joy to fellowship and pray there.

I do apologize I didn’t have any pictures for this time. Thanks again for allowing me to lead,

God bless all of those who came..

I had thought about Deuteronomy 30:19 as we came today. Where God says choose life so that you and your children may live.

During the early part of Jeff’s shift we were joined by four young people from Steubenville, OH, – three of whom are students (graduate and undergraduate) at Franciscan University.  Even though dressed up from having come from a talk by Franciscan University professor Scott Hahn in Sharpsburg, this didn’t stop them from praying on their knees.

For the bulk of the shift, however, it was just the two of us.  The weather couldn’t have been better and the streets were on the quite side given that no major events had been scheduled.  I only heard one negative passing comment and witnessed a lot of people walking by who would not have otherwise known they were passing an abortion clinic had we not had a presence on the sidewalk.  One guy who gave me a fist bump of support was very likely a member of the visiting Cincinnati Bengals given his size and the size of the guy he was with.

MORE PICTURES AND STORIES WILL BE ADDED ON SUNDAY.