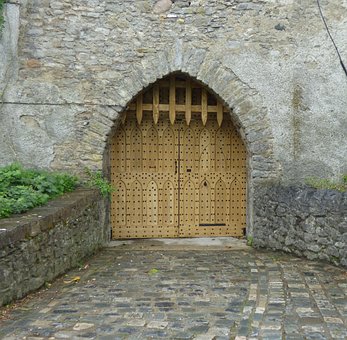 THE GATES OF HELL

“And so I say to you, you are Peter, and upon this rock I will build my church.  And the gates of the netherworld shall not prevail against it.“  Mathew 16: 18

Bishop Robert Barron, in a reflection in the August issue of MAGNIFICAT, opened my eyes to what the second part of this passage likely means.  He writes:

“I always took it to imply that the powers of hell would come after the Church and that the Church would always be able to withstand the attack.  But in point of fact, the figure of speech employed by Jesus is meant to suggest something in the opposite direction.  In the ancient world (and really up until practically modern times), an invading army would attack a walled city at its most vulnerable point, namely, the gates.  Therefore, to state that the gates of the underworld will not prevail against the Church is to imply that the community of Jesus is the aggressor.  Jesus is not saying that we will always prevail against their attack; he is saying that they will never prevail against our attack.

“Mind you, we never fight with the weapons of the world, but by God, we fight – and we will win.  We aren’t tremblingly waiting for our enemies to come after us; we’re going after them!  Love will conquer hate; compassion will conquer cruelty; non-violence will conquer violence.  So go forth, disciples of Jesus.”

I don’t know about you, but I feel a little bit more inspired.  It’s not defense we’re playing out there, it’s OFFENSE!

AND NOW, ON TO OUR REPORTS:

What a blessed day at the vigil this morning.  We had two priests along with the prayer warriors from St Anne’s and the Guardians For Life.  We participated at 8 am in the Worldwide Rosary and Fr. Tim lead all in Divine Mercy and the Stations of the Cross. While the harvest was abundant today, we had lots of laborers.  We actually ran out of the black “Pray To End Abortion” signs.  What a blessing. The greatest blessing of all was that not many went into the abortion center today.  No doubt God hears our prayers and changes hearts and minds.

It was a beautiful shift. I arrived and the sidewalk was so crowded with praying people, I almost had nowhere to stand! Good problem to have! Fr. Tim and the Guardians for Life were there, as well as St. Anne’s church. It was wonderful to have constant prayer going. Eloisa and Maria from Iglesia Sion Church also showed up. I have seen Eloisa in many pictures and she has become a regular on this first campaign she has participated in! Rose and Stacey from St John the 23rd also came. Shortly after Stacey arrived, a passerby engaged Stacey in a respectful philosophical discussion. I think it was still going when I left. It was good to listen in on the various points and perspectives. PP was definitely covered in prayer on this beautiful day! ~Sue

We had a quiet, very prayerful shift today.  All praise and thanks be to God!  Many thanks to prayer warrior volunteers from both St. Sebastian and St. John XXIII.  I was feeling a bit spiritually out of sorts today as I arrived for my shift.  I definitely felt more peaceful as the shift went on.  I believe that sometimes even we ourselves (even though it is not our objective) can benefit from all the prayer going on at the vigil!  My hope and prayer is that the people entering and exiting the clinic, along with those who work in there, benefited even more today from all of the prayer.

Lots of yellow cards were given out and accepted today.  Did you know that we are aware of at least two lives saved because of people receiving those yellow cards and accessing the info on them?  Diane, who created them, keeps them stocked in the smaller of the two boxes — don’t hesitate to give them out, along with the plentiful supply of other literature in those boxes!

I was glad to have “pray-ers” from both Assumption and St. Sebastian on the sidewalk with me this afternoon.
I gave away 2 of our feet pins. A young woman who had stepped outside of P.P. to smoke, accepted one of our pins and surprised me by saying that she was actually trying to have a baby. She thanked me for literature but, ended up returning inside to P.P. I hope that God leads her to look elsewhere.

Rick, Mary, and their son from the Assumption church were praying as our shift began. Charlie from Assumption joined them
Many people were out on this beautiful day. A philosopher came twice to talk to the group, talking not debating. I talked to one girl who brought her friend. She had talked to the earlier shift. She put Martha’s Vineyard info in her bag as she said Planned Parenthood threw away our info earlier. As she left with her friend, she said, “I will give her that paper.”

Maggie was the manager of the 5-7 shift and wrote:

Praise God for a very high traffic day and wonderful people from Assumption parish to pray with. We had a lively discussion with man about the sanctity if life . He had some confusion about rape but otherwise was right on. A mother whose birthday was today the day of our lady of the rosary and her son were there with me. She wrote this beautiful poem: