Vince wrote the reflection for this blog and invites all to pray:

When most people think about abortion, they think about the mother who carries the child and the child itself.  Forgotten many times is for every abortion, there is also a father.  The father is many times thought of as the one who may be instigating the abortion.  Though this may be true, there are many instances when it is not.

During one of the prayer vigils at Planned Parenthood last fall, a young man approached while we were in the midst of our prayers.  He stopped directly in front of the window that featured a young woman in a poster, with a warm and inviting smile that seemed to say come on in, we will take care of all of your problems!.  This young man stood face to face with this poster for maybe a minute or two and just stared.  He finally spat on the window, turned and faced me and continued to move on.  The hurt in his eyes was overwhelming.  I do not know what his story is, but I think it is safe to say that he is hurting by something that occurred in Planned Parenthood.

We have to realize that there are many men out there who have been impacted by abortion as well.  Perhaps, the woman they were involved with became pregnant and unequivocally chose to have an abortion, in spite of any resistance from the father.  Let’s face it, if the woman decides to go that route, the man has no say.  What can he do to stop her?  There may be other instances where a man may have no knowledge at all, that he conceived a child, if the woman decides to have an abortion without ever letting him know.

This Sunday is Father’s Day.  It is the final Sunday that we will be reciting all 20 mysteries, on behalf of the unborn, the father’s (& mothers) who lose a child and of course, the ultimate goal, the closing of Planned Parenthood at 933 Liberty Avenue.  For those of you who are fathers, come on out at 7 AM for our brothers who have lost a child through abortion.  Heck, come on out, even if you are not a father.  We would love to see you ladies too!  It takes about an hour and a half.  You will feel better for it.  You will feel even better for it when the day comes that they put the padlock on that place when it goes out of business once and for all, and you know that you had a hand in it.  It’s time to fight the good fight all of you good & faithful servants!  We hope to see you!

Fatherhood Aborted   read the extraordinary work the author completed before his untimely death.  The author was a leader with Care Net 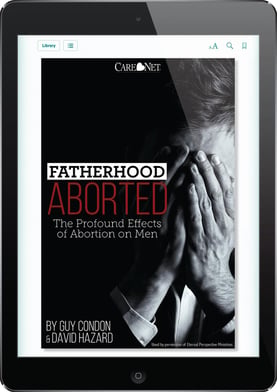 Amazon.com describes Fatherhood aborted as a unique look at the emotional devastation men face from being involved in abortion.Â

One thought on “Father’s Day Reflection 2017”