(This reflection was submitted by regular vigil participant, Bill S.)

For as long as I can remember, sports have been a part of my life.  I have played for, rooted for and coached so many different teams that I have lost count.  While it would be folly to pretend it had nothing to do with my competitive nature, I still believe a significant reason for participating was the chance to be a part of something that is inspirational.  And nothing provides that type of opportunity like rooting for the underdog.  A favorite quote of mine (with a Biblical reference, no less) from the book “Moneyball” by Michael Lewis is: “The pleasure of rooting for Goliath is that you can expect to win.  The pleasure of rooting for David is that, while you don’t know what to expect, you stand a chance of being inspired”.  Almost inarguably, the greatest David and Goliath sports story of the last century would have to be in the 1980 USA Hockey team at the Lake Placid Olympics.  This story has been told and retold so often it is easy to forget just how astonishing it was for a ragtag group of 20+ year old college kids to even be on the same ice with the most systematically dominant group of hockey players on the planet.  Let alone compete against them.  Most of the Soviets had been playing as a group for better than a decade.  They had won the previous 4 Olympic Gold Medals and had a record of 27-1-1 over that period.  Only two weeks prior to the Olympics, in an exhibition game at Madison Square Garden, the Russians had trounced the US squad 10-3, scoring almost at will.

Somehow though, on the night of February 22, 1980, the result was completely the opposite of what the world expected.  Overconfidence?  home ice advantage?  Or perhaps it was inspiration.  On that night, coach Herb Brooks delivered a pre-game speech that was the culmination of 8 grueling months he and his players had spent preparing for this very moment.  And so with apologies to herb Brooks, I have attempted to adapt his speech so that it might apply to the David and Goliath story that is 40 Days for Life.

Wouldn’t you agree that we are little more than a ragtag group of amateurs (a bunch of David’s, if you will), that have been pulled together onto a team that (from the outside), would appear to have little chance of victory against the multi-million dollar (Goliath) abortion industry?  But, like that 1980 team, we have a few key things in our favor.  We have a singular and clear purpose, we have persistence and a dedication that will not waver.  We have a willingness to sacrifice for the betterment of the team and we have a goal that is both pure and worthy.  With the backdrop of the recent videos exposing Planned Parenthood’s practices, we can see that we have reached a point of great opportunity very similar to the one the US Hockey team had before them as they prepared to face the Soviets in the Olympic semi-finals.  So here is the adapted version of his famous speech:

“Great moments are born from great opportunity.  And that’s what we have here at this moment in history.  That’s what we’ve earned here through our sacrifice and our vigilance.  One chance.  if we fought to have them defunded ten times, they might win nine.  But not at this moment.  Not this time.  For now we pray and we stand vigilant.  Right now we expose them for what they are.  And we shut them down because we CAN!  At this singular moment, WE are the greatest force for LIFE in the world.  You were all born to be Pro-Life warriors.  Every one of you.  And you were meant to be HERE at this point in history.  This is our time.  Their time is done.  It’s over.  I’m sick and tired of hearing about how Planned Parenthood is pro-woman’s health.  This is our time.  Now let’s get out there on the sidewalk and win this!”

And when that day comes that the defunding of Planned Parenthood is a reality and their doors are permanently closed, we can watch as the clock ticks down and proclaim with the same brilliant call as AL Michaels…”do you believe in miracles”?  YES!!!

Now is your opportunity.  Stand confidently when you are signed up to be at the clinic.  If you have been down already…then come back.  If you are not signed up, then sign up or just show up.  Any day, any time.  And bring a friend or two.  help us to complete this miracle. Bill S.

If you are feeling inspired, we have a few hours each day where there won’t be many at the vigil site:

Now, onto the stories from today…

Sue was our first shift manager of the day from 7-9am and wrote:

“I was joined for my shift by the two Bills from Riverview Baptist who responded to the email that pray-ers were needed, thank you Bill and Bill! 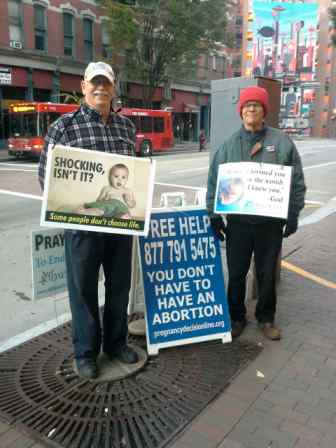 It was a beautiful morning, but colder than I expected. There was lots of foot traffic on the street with kids going to school and adults going to work. I did my best to say Good Morning so that people will recognize we are standing there and we can bring attention to what is going on. Otherwise, it seems people are absorbed in getting to their destinations and do not even “see” us. About 8:30, we were joined by the 3rd Bill (Bill H). 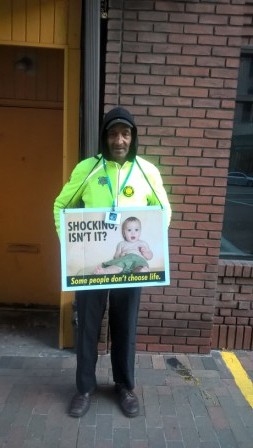 Some employees entered planned parenthood and two clients. One said she was just there for testing and the other woman entered with several employees. I did attempt to inform them what a bad place planned parenthood is and offer them free help. Sometimes it is tough to reach people from a distance, outside the yellow line. We were able to do a lot of praying and the Sun was starting to shine on the sidewalk as our shift was winding down.”

Mark managed the vigil from 11-1 and sent in these photos from the faithful group from St. Bernadette in Monroeville: 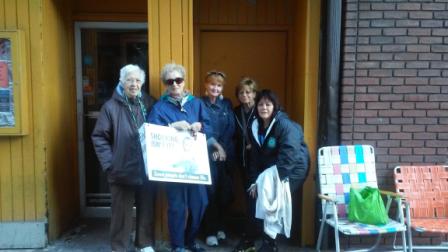 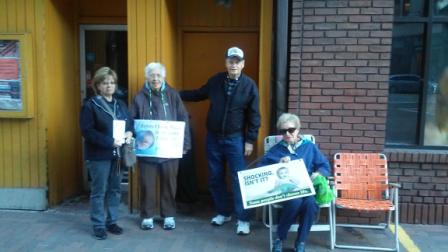 Beth managed the vigil from 1-3 and wrote:

Once again, remind me of this day next February.  With the beautiful sunshine and warm breezes, the faces of the people going by were generally warm and accepting.  Dee from St. Bernadette’s had her prayer warriors present and Tom C., Ed M., were joined by Patty, R. from St. Thomas More and Evangelist Bill from Washington, PA .  A few people stopped including Emily with her four men (husband and three beautiful boys coming from a day at the science center) and Jim F., a frequent prayer on his break from work.  It’s true, If you want to meet wonderful people, just join us at 40 Days for Life.

Francis was our shift manager from 3-5 and sent in this inspiring photo of a woman from St. Anne in Waynesburg: 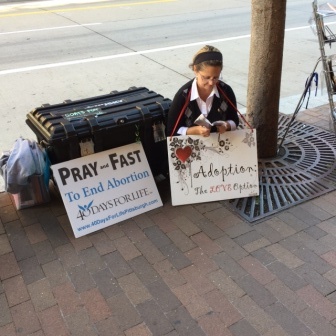 Seamus managed the vigil from 5-7 today (Monday) and wrote:

Bill and Kim from St. Ann’s Waynesburg in prayer with me from 5-7.  Apparently a meeting in PP with about twelve entering this evening after regular hours, giving the late day prayer warriors an unusual and important focal point.  Lord, please harden not our hearts and grant us all grace to carry on.  In Jesus name.

If more photos and stories come in from today, they will be posted here.