TO KNEEL OR NOT TO KNEEL…

THAT WAS MY QUESTION 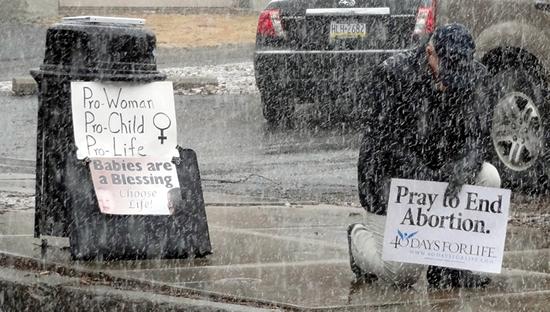 When I was a kid, every two or three months we would make the trip to Gettysburg to spend the weekend with my Aunt Sis. In the one bedroom there were three twin beds:  I would be in one, my sister in the other, and my dad in the third.  While Margaret and I would be in bed by 9, my dad would stay up for at least another hour.  Occasionally I would hear him come in and I would secretly watch him.  Each time he would do something that would never fail to raise the hairs on my arm.  Right before he pulled down the covers, this man who never really spoke about his faith (despite never missing a Sunday mass or holy day of obligation) would get down on his knees, put his elbows on the bed, and pray for a few minutes in silence.  Without even knowing it, my father’s quiet prayer and act of humility made the most profound impression on me. I could see that his faith was real.

Two Friday’s ago I was by myself in front of PP for the last hour of my shift. The sky became darker and the street was fairly quiet.  Yet my attempts to pray were distracted and I just didn’t seem to posses the will to concentrate.  After 15 minutes or more of this I began to sense the Holy Spirit saying to me:  “Pray from your knees.”

Well, after initially resisting this idea for several minutes, I finally decided to give in to it.  So, with a “PRAY and FAST” sign around my neck and my hoodie pulled up over my head, I got on both knees, bowed my head, and closed my eyes.  Despite my awareness that I was now more vulnerable in this position on a couple different levels, I actually felt more at peace.  At the same time I sensed my capacity for prayer was considerably better, even if it still wasn’t completely without distraction.

While I had several reasons for resisting the idea of getting down on my knees to pray, perhaps my biggest centered on what Jesus says in Matthew 6.  He warns us not to perform religious acts for other to see. But as I reread it recently I noticed that the admonition focused on the motive more than the act itself.  If one does it for self-glorification then “they have already received their reward.” (verse 5)  So if our primary motive is to intensify our prayers and pleadings to God to bring about an end to abortion, how could God not be pleased with this?  But even if we’re moved to do it because we simply want to amplify to everyone they are passing by a present-day Auschwitz, then I can’t help but conclude thinking that God is pleased with this as well.

Either way, how could people not see by this act that our faith is real?

“Nothing we do to defend the human person, no

matter how small, is ever unfruitful or forgotten.

Our actions touch other lives and move other hearts

in ways we can never fully understand in this world.

Don’t ever underestimate the beauty and power of

the witness you give in your pro-life work.”

AND HERE ARE THE REPORTS FROM THE SIDEWALK.

Constant light rain did not dampen the spirits of the dozen faithful from Saints John and Paul in Wexford, some of whom arrived before 7 AM.  Groups gathered on each side of the arc to pray and witness to all the early attendees of the St Patrick’s Day.  Surprisingly there was not a lot of foot traffic on the sidewalks and fewer women went into pp than what might be normal for an early Saturday morning.

One young woman who came out of planned parenthood to smoke a cigarette told us “I’m only here for birth control.”  So we informed her that they are can cause a abortion approximately once every 12 cycles.  She seemed surprised yet was reluctant to take any information.

I was blessed to have Dean as my shift manager replacement as he was kind enough to come early and bring me a delicious, really hot cup of coffee.  Thank you Dean.  I really appreciated it.

The good news this morning was that traffic was light at P.P.  Tim B. said that he saw 4 couples enter the facility.  Thank God for throwing cold water in the form of rain on the would be revelers downtown this morning.  I had parishioners from Saints John and Paul in Wexford praying with me during my shift.  It was quieter than usual for a Saturday but, that’s probably because a lot of the downtown traffic was diverted due to the parade.  Also joining me were fellows from the Knights of Columbus in Steubenville, OH, as well some students from Franciscan University and a gentleman from St. Guadalupe in Kittanning.  Remember, if the rain “keeps up”, it’ll stop!

I arrived to find the group from St. Anne’s in Greensburg praying faithfully.  There definitely was a sense of calm the whole time we were praying.  I was later reminded of the scripture verse “The  angels encamp around those who fear the Lord.”  when a member of Crossroads church in Butler showed about after 3pm and said he felt the presence of the Lord there.

From 1-3 a few women went in and out and we offered our prayers for them.  One of the ladies from St. Anne’s knelt in prayer half of the time and I knelt for a little bit too.  It feels strange to seem like the somber group among many people walking by enjoying their time to party, but I felt privileged to be among those reminding others of the somberness of this place.  One young man looked at the 40 Days sign I was holding and asked:  “Fast and Pray?  Why do you fast?  You mean you don’t eat?”  I said –fasting goes along with prayer because killing babies grieves the heart of God.  He said “oh”  and walked away.  Oh dear Lord may the younger generations wake up to the devastation of abortion!

I was glad to have two men there with us praying and it made me feel safe.   Seamus was manning the door next to the bar and that was good.

Not much to report. About 6 girls went into the clinic during my 2 hours.  We had a great group of people from St. Anne’s in Waynesburg, along with folks who just decided to stop down.  The rain stopped by 12:30 just in time for crowd to start popping up.

Love and kindness was what I felt as Julie and Liz stayed into my shift.  Liberty Ave remained busy with St Patrick’s Day traffic.  One couple left PP – the woman crying and walking slowly.  Prayers went up for her.

Pastor Jeff from Butler came and prayed for mothers, fathers, babies, and workers.  He was disappointed not many hecklers.  We were grateful.
A client from PRC, who works in town, stopped to visit and shared her story.  She had abortion scheduled, but a friend made her stop at PRC.  She saw little arms and legs wiggling away on ultrasound.  She chose life and adoption!

Joe managed the vigil from 5-7pm and wrote:

My shift was a breeze compared to last St. Patty’s day.  Other than 1 young  man throwing some coins at my feet and swearing at me as he scurried away there was just the normal sneers and jeers I expected to receive today.  All in all, the positive comments more than made up for the negative ones.

Please pray for a young women who stopped to politely scold me for being there, but after a few minutes of conversation she broke down and began to cry that’s when her boyfriend insisted she leave and slightly aggressively pulled her away.

I gave her a brochure and told her to call us and we would help her.  I believe she is having an awakening of her soul.  Also, please pray for my friends son Matthew (31) who was buried today.

Holy Mother please intercede for us!!!

MORE STORIES AND PHOTOS WILL BE ADDED AS THE COME IN.