A few months ago it was brought to my attention that primarily through the efforts of one man – an evangelical Christian who was clearly guided by his deep faith – that the centuries-long tradition of slavery in Great Britain came to an end.  That man was William Wilberforce. 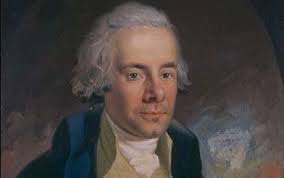 He made this fight his great life’s work.  History records that the two great victories of his life were the abolition of the slave trade in Britain in 1807 and three days before his death in 1833, the abolition of slavery in nearly all of the British Empire.  But his greatest victory really came to fruition not long after his death.  You see, before Wilberforce, few people thought slavery was wrong.  But not long after his death, most societies in the world came to see it as a great moral wrong.  By the strength of his faith in Christ, he changed the entire world.

Let’s remember the example William Wilberforce has given us.  We have on our side Christ, the Light of the World.  Let’s ask him today that we will never cease in our efforts to shine the light on the greatest moral wrong of our time.

“If to be feelingly alive to the sufferings of my fellow-creatures is to be a fanatic, I am one of the most incurable fanatics ever permitted to be at large.” ― William Wilberforce

Now for some stories from the sidewalk…

Tim managed the vigil during the early morning hours and wrote:

We were blessed today with a visit from the Choices Pregnancy Center mobile sonogram.  Sue, Betsy and Laura were available to offer counseling, free pregnancy tests and free sonograms.  What a great resource to have the mobile unit so close to redirect those women who have doubts or need honest information.  Praise and thank God and thank the team from Choices.

As usual Bill H. was in front of pp to help unload the 40 Days resource material well before dawn from Dianne and Tom.

We were joined today by Reverend John  from St James Fellowship and the faithful prayer warriors from the Bellevue Knights of Columbus.

The regular early Saturday morning sidewalk counselors Meredith, Virginia and David were on hand to offer resource information and redirect women to the Choices mobile unit.

What a great witness today to the sanctity and dignity of life starting at conception.

Our thanks to Sue and her Choices team for joining us with their powerful witness and easy alternative to pp.

Dean managed the vigil from 9-11am and writes:

As I stood outside of P.P. I noticed that they had many escorts on the street this morning. They were distinguished by the bright, day-glo jackets marked with P.P., that they were wearing. Jeff Burgman told me that they usually remain on the street until about 10:00 am and all of the appointments for abortions have been filled.

That’s funny, I don’t remember seeing them on the street last winter when it was 5 below 0 outside. Priorities I guess. Pictured are some brothers from St. Vincent’s in Latrobe and Jeff B.   Also standing with us was Brandon from Nashville, representing an Order of the Franciscans.

Maggie managed the vigil from 11am-1pm and wrote:

It was hard today. There were a lot of young women going in. One couple in particular really made me sad. They came towards the door and John Mihm spoke to them and they walked away. Then they came around again and the girl was waiting back 2 doors down. I spoke to her telling her that if she really didn’t want to do this she didn’t have to. They went in. I prayed so hard for her. I asked her guardian angel and Mary and Jesus to give her the courage to leave but sadly they didn’t. They came out an hour later. I didn’t get a chance to speak to them that time. The girl looked sad. I don’t know what can be done in an hour but I can’t help but think of all the girls who go in there and don’t want to make the choice to take their child’s life. There was an Asian couple who I saw go in and come out again. Oddly they ran past us both as. They entered and exited. I also saw a young girl come out with her mother. I just prayed that if they did have abortions that God’s love would just wrap around them and when they come to know what they did, and that day will come, that they can have a person there to assure them of God’s forgiveness. All these women going into planned parenthood are God’s special chosen beautiful children. I felt that in a way we who pray there at the clinic are praying at the foot of the cross. Jesus is being crucified anew with the death of these innocent babies. How much pain, sadness and disappointment God must feel.

Wonderful ladies from St. Colman in Turtle Creek provided the witness from 11am-3pm.

I (Nikki) had to call Maggie to encourage her after I read this report from her.  I told her she should not feel sad!  If that couple that she spoke to only stayed in the clinic for ONE HOUR and then LEFT….they could NOT have had a surgical abortion!  PRAISE GOD!  I think that may have been a save!  It sure sounds to me like they changed their minds!!!  Maybe the Asian couple changed their minds too!  I think this is a very encouraging report by Maggie!!!

Also, Tom Venditti called and left a voicemail today saying that there also was a young woman (with her mother) who changed her mind and left the East Liberty abortion clinic this morning!  God is SO GOOD!  I think lives were definitely saved today!

First when I arrived two ladies had just arrived as well and Maggie had signed them in.  Unfortunately there is not photo of them because we were so focused in constant prayer I never thought of stopping to take a photo.  I think Pauline and her friend would have wanted it that way!  Pauline from Grace Commmunity Church in Bridgeville led us in a series of prayers as we went around in a circle.  Then Kelly and Sarah showed up with the St. Colman group.  Kelly and Sarah, two freshmen at Duquesne prayed with us and a few folks from St. Colman went on the other side of the circle.

Right as Bill left at 1:30 or so, he mentioned that he saw a family of 4 women go into PP and he thought one of them will be having an abortion, so we prayed for them.  The oldest of the 4 women came in and out a couple of times and then all 4 of them didn’t leave PP until nearly the end of my shift, so they were there for about 3 hours like me.  It was hard to tell when they left as a group, who might have been the one to have the abortion.  Beth offered them information but they refused.

Otherwise, while Pauline and her friend were there we sang praise songs and prayed many intercessory prayers.  Then it was just me and the two ladies from Duquesne and we offered up the Rosary- Joyful Mysteries as a prayer of intercession.
I spoke to two teenage girls that went into PP very briefly.  They said they went in to make an appointment for a checkup.  I gave them the Pregnancy Center card and warned them about the lie of abortion, telling them that we care very much about beautiful young ladies such as yourselves.
Many many people walk by at the 1-4pm hour.  They walk by without a sound.  Also someone yelled at us to go home from their car.   The presence of Christ is palpable on that sidewalk.  Praise God and may all who considered abortion change their minds and may all who went through with it find healing a reconciliation in Christ. Amen.

Joe managed the vigil from 4-7pm and writes:

A GLORIOUS AFTERNOON MET WITH MOSTLY POLITE UP BEAT CREATIONS OF GOD WALKING BY.

PRAYERUL HAPPY DISCIPLES ( SUE,BETH & THE FAITHFUL FROM ST.ELIZABETH OF HUNGARY) TO SUPPORT ME ON MY SHIFT.

I’M LEARNING SO MUCH ABOUT SO MANY THINGS. THANKS BETH FOR HANGING TO THE END WITH ME. I SO ENJOYED CONVERSING WITH YOU.

I DON’T KNOW WHY GOD IS BEING SO GOOD TO ME, BUT I’LL TAKE MY BLESSINGS AND RUN LIKE A THIEF IN THE NIGHT.

More stories and photos will be added as they come in…stay tuned!