When we make sacrifices during these 40 days, we direct our extra prayer time, our fasting, and the general inconvenience of  standing in front of PP towards the good of others.  We are putting our hope in God that he will transform these various sacrifices into lives being saved and hearts being changed.  But it keeping at it for a full 40 days can get to be a little much, and we might be tempted to ask ourselves questions like:  “Why am I doing this again?”  “Is this really worth it?”  “Are my sacrifices really doing any good?”

In the movie, Field of Dreams, there’s a great scene in which Ray (played by Kevin Costner) has gotten fed-up with all of the sacrifices he has been making on blind faith – which benefited others, but not him.  He finally asks Shoeless Joe Jackson:  “What’s in it for me?”  Shoeless Joe just looks at him, but doesn’t give him an answer.  Despite this moment of doubt and frustration, Ray presses on in faith with what he believes the voice he heard instructed him to do.  In the end, everyone, Ray included, reaped incredible rewards for his faith and perseverance. 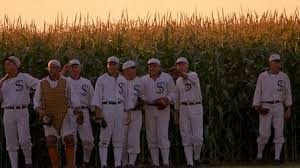 With respect to all of the sacrifices participating in 40 Days for Life requires, I’m sure I’m not the only one who stops and asks (and quite often):  “What’s in it for me?”

What’s amazing, however, is how much I find there is in it for me.  First of all, I’ve observed that when I’m forced to have discipline in one area of my life, I tend to have greater discipline in all other areas too.  I’ve also noticed an increase in the grace to handle the problems that life throws at me.  But probably the greatest benefit has been all of the wisdom, inspiration, and camaraderie which comes to me from the people who have decided to persevere right along with me.

Here now are our reports from the front:

PEOPLE FOR OTHERS, lpwebteam@loyolapress.com, offered this on Thursday:

I was reminded of something in The Dialogue of Catherine of Siena.

“One alone is excluded from my companionship, since I cannot be “in the midst” of someone who has no companion.  Those who are wrapped up in selfish love of themselves are alone, mere nothings, because they are cut off from my grace and from charity for their neighbors.” P107

“We must learn to eat the food of heaven or starve to death eternally.”  C.S. Lewis said that somewhere.  The food is love.  “Love” is an acquired taste for a lot of us for reasons too many to count.  God gives us a lifetime to learn.  He gives us each other to practice on.  He forgives us as we falter and fail.  He won’t forgive us unless we forgive each other.

Holy Wisdom Parish committed to pray at PP from 7 to 11 this Sunday morning.  7am in downtown Pittsburgh was dark and cool.  The PP building remained dark and empty and looked cold and hostile.  The streets were almost empty.  Sally and Al Brunn pulled up in front very early.  Together we prayed the Joyful, Sorrowful and Glorious Mysteries of the Rosary before they had to leave for Mass.  We were joined by other early risers, Bill and Kathy. Mary came to pray for the entire time from St. Monica’s parish.  Throughout the morning, prayers filled the morning street.  Janet, Paul, Claire, Bob, Kathy, Ray, Michaella, Veronica, Jeff, Chris and Jennifer arrived at intervals to pray.  Saturday, Maria and William came for Holy Wisdom because they were unavailable to come today.

Often, groups of Spanish speaking people came by and greeted us.  A man of their group walked back to us and asked who we were.  I gave him the 40 Days pamphlet.  He said he would stay and pray except he had to be somewhere.  He asked for a Rosary.  I was glad to have one this morning for him.

Paul said that he sometimes goes to Mass in Canonsburg.  He was going to check if that Parish was involved with 40 Days for Life.  He will offer to be the contact person if not.  We’ll be in touch.

Here’s what Roseann had to report from the 11-1 shift:

When we arrived at our 11:00am – 1:00pm shift there were quite a lot of people there.  However, it seemed that everyone’s shift was over at 11:00am except for one prayer warrior, Mary Ali, who was there at 8:00am and stayed with us until 12:00pm.  After that we were alone until 1:00pm. It was a very quiet morning/afternoon which gave us time to reflect and pray.  One man walked by with his son who looked to be about 12 years old and the father said that we should be ashamed of ourselves. Now this is not the first time we have heard these words and I am sure others have heard them also.  But for some reason it bothered me today.  I am certainly not ashamed to be there.  Next time I will ask the question “Why do you say I should be ashamed?” I can understand if they are angry or don’t agree with our position but what I don’t understand is why they think I should be ashamed.

The 3-7pm shift was adopted by the faithful Ascension Roman Catholic Church in Ingram…led by their pastor, Fr. Brian Welding.  Emily, who coordinated her church’s day, sent in the following photos:

Emily wrote the following account of her church’s shift at the vigil:

Another family with 4 or 5 young kids came for an hour or an hour and a half and then the Koslosky family came just as I was leaving, about 6:30. The family with the kids ended up moving to stand on the other side of the circle because the bar next to PP propped open the door after the football game in order to blare music at us.

About half way into our shift there (after Fr. Welding had left), a young man came out of the bar, then I think he went back in. A few minutes later he came out again, 4 of us were there from Ascension at the time. He stopped mid-way through the circle, right about in front of the doors of PP, turned around, pointed his finger at each of the four of us individually and said, 4 times over…to make sure we got his, point, I suppose…. “f— you”. Two of his friends followed him out of the bar, blew a whistle twice (about 2 feet from us) and yelled “bye Drew” after him.  Another prayer participant and I both said “God bless you” back to him at about the same time.

Frankly, I don’t care much about what’s said to me while I’m there, but what ticked me off was that those young kids were all there. Now, I suppose that any family who brings their kids to pray there knows well what might happen, but even still.

I know this isn’t remarkable or out of the ordinary…but boy, it does make the battle of being there that much harder.

And the battle goes on….